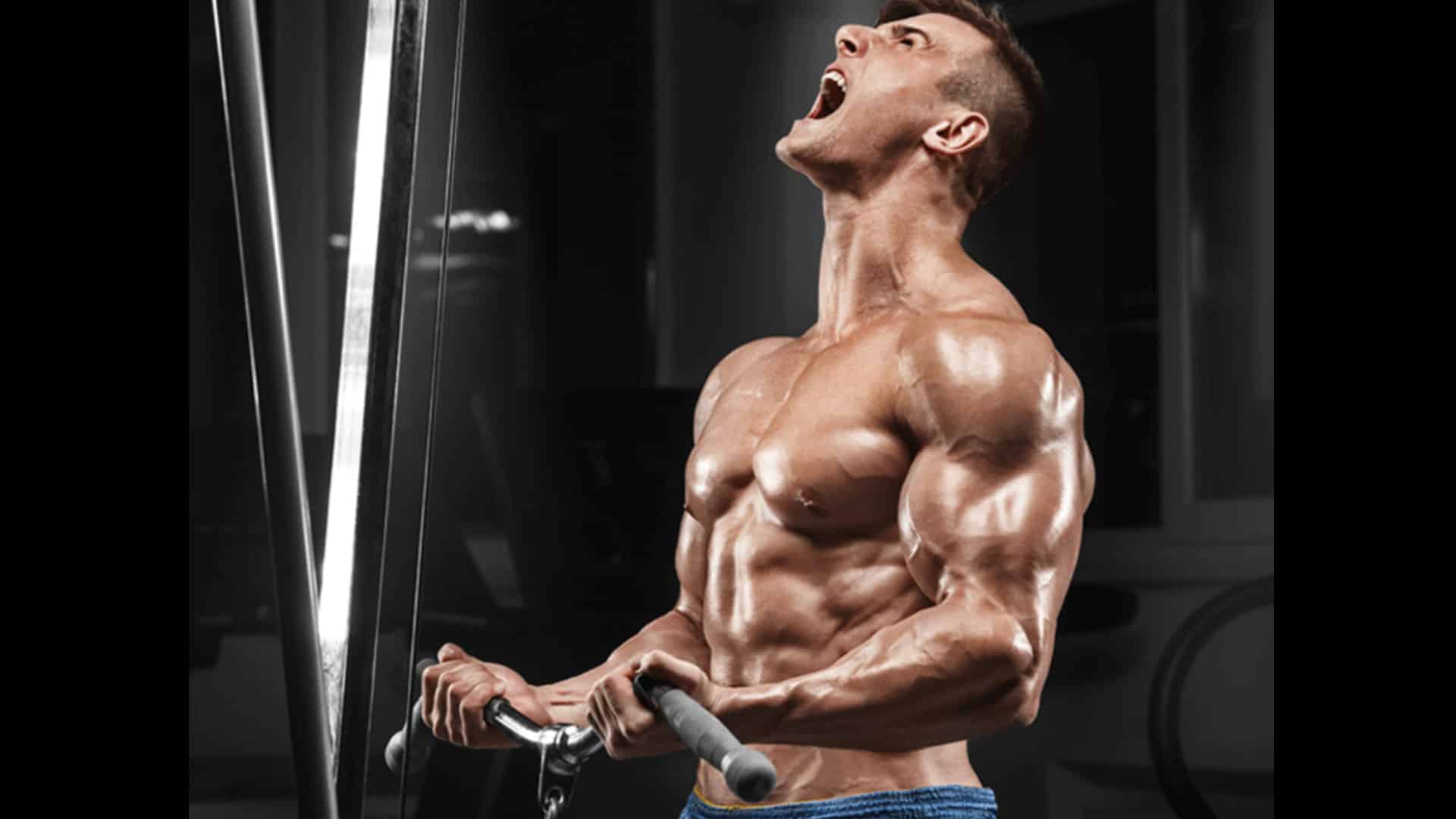 To build the bigger and impressive biceps first, we needed to understand the anatomy of the biceps muscle, which help to perform the cable biceps workout at the best level.

For building bigger and impressive biceps involves more than doing the same bicep exercises over and over. Biceps are small muscles, to grow them takes time, knowledge, and intellect.

In this article, we are going to tackle the best cable machine exercises of the bicep, which is often underestimated by those who lack a complete understanding of this.

The Bicep Muscle consists of the following parts:

Biceps brachii muscle (biceps) is a large, thick muscle of the upper arm.

The Biceps Brachii is attached to the forearm bone called the radius and originates at the scapula in two heads (the Bicep gets its name from the two heads).

Brachialis lies on the outer side of the arm.

The brachioradialis muscle group is firmly attached to the bicep and is also activated when tracking back and biceps.

What is Cable Machine Bicep Workout?

The cable machines, an exercise that trains the biceps in isolation, and places the muscles under constant tension throughout both the concentric and eccentric phases. This is one of the biggest cable bicep training benefits over other methods.

It is popular with strength training beginners thanks to the simplicity of the exercise, and the fact that the cable itself assists the user in lifting the weight.

How To Train Bicep With Cable Machine

Bicep exercises with dumbbells and barbells aren’t for everyone. You might have an injury that limits your range of motion, or simply find that free weights are cumbersome. You can still get bigger and stronger biceps by working out with the cable machine.

Using the cable machine, you’ll be able to hit all the head of biceps from different angles and through a range of motions.

The cable machine will provide smooth constant tension on your muscles, which leads to more time under tension and in turn more potential for muscle growth.

You can also change body positioning, weight load and attachments used, which can alter your grip thus targeting your muscles differently.

A cable machine can come in various shapes and sizes. You can use various attachments with the cable that can hit pretty much every muscle group one way or another.

The cable bicep workout offer an effective way to train the biceps, let’s have a look at some other benefits of bicep exercises with a cable machine.

There are best cable bicep exercises for the biceps. Use these moves to get your biceps pumped up and improve the overall function of your upper arms.

The High Cable Curl exercise is a great option that will help you to target the biceps and builds width and thickness in the muscle.

There are two main versions of the high cable curl: one-arm and two-arm. Both variations are effective, but the one-arm version allows you to use more relative weight for potentially greater gains in biceps size and strength.

The cable rope hammer curl workout is a popular arm-focused exercise performed with a rope handle attached by a cable to a weight stack.

It uses a neutral (palms facing one another) grip, which targets the forearms and brachialis muscles in addition to the biceps.

3. Behind The Back Cable Curl (Bayesian Curl)

Doing cable curls behind the body shifts the emphasis of the exercise onto the outer biceps and minimizes the chance of you developing unsightly muscular imbalances. Must try this cable bicep workout.

It is a single-joint arm exercise that builds strength and size in the biceps using a cable stack, a preacher bench, and a rope grip.

The neutral or “hammer” grip amplifies activation of both the grip and the brachialis muscles, building arm thickness. The angle of the bench also effectively removes the shoulders from the movement, largely isolating the biceps.

The cable curl workout is performed in a standing position by facing one end of a cable machine with the cable fixed at the bottom of the machine and set with an appropriate weight.

Reverse cable curl is an exercise machine exercise that primarily targets the biceps. 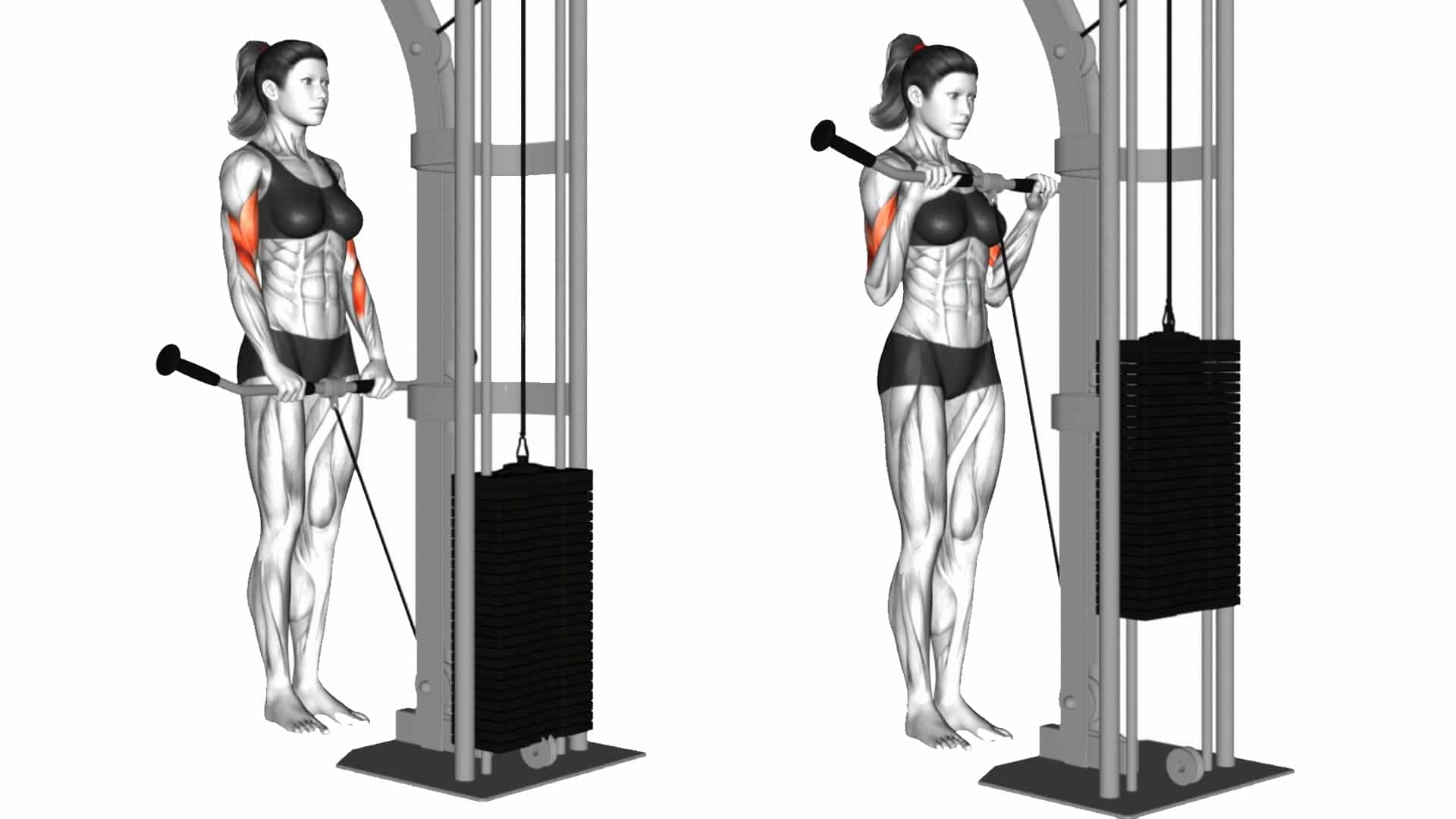 The Cable drag curl workout is a unique bicep curl variation in which you don’t completely bring the weight in front of your body. Thus, you have a more difficult time swinging and using momentum to get the weight up. 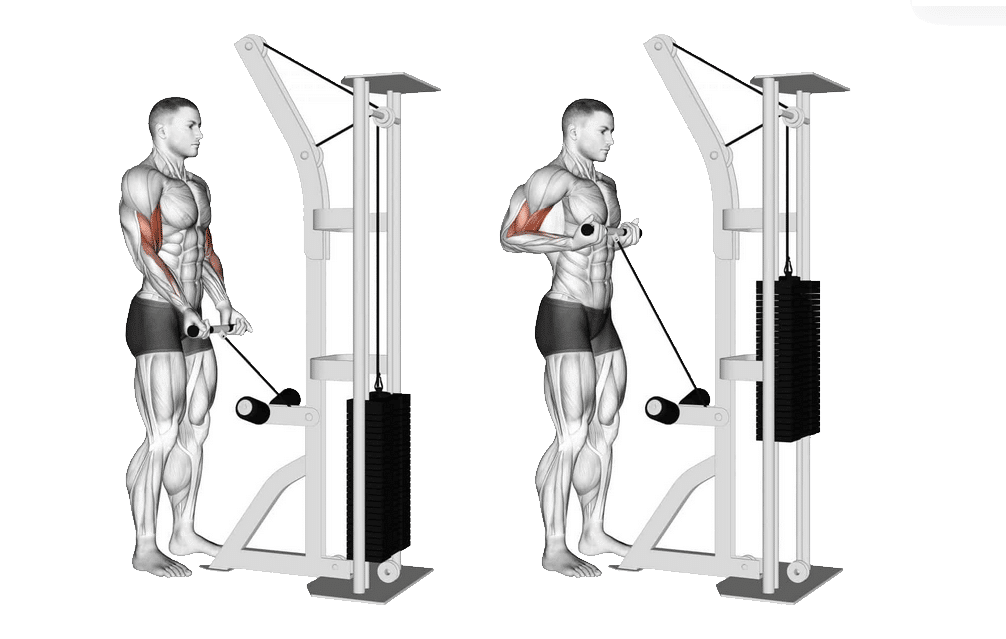 When doing a bicep workout with a cable machine, there are plenty of single-arm exercises you can add to correct potential imbalances.

The cable standing one arm bicep curl exercise is a single arm version of the bicep cable curl workout that targets and isolates the bicep muscle. 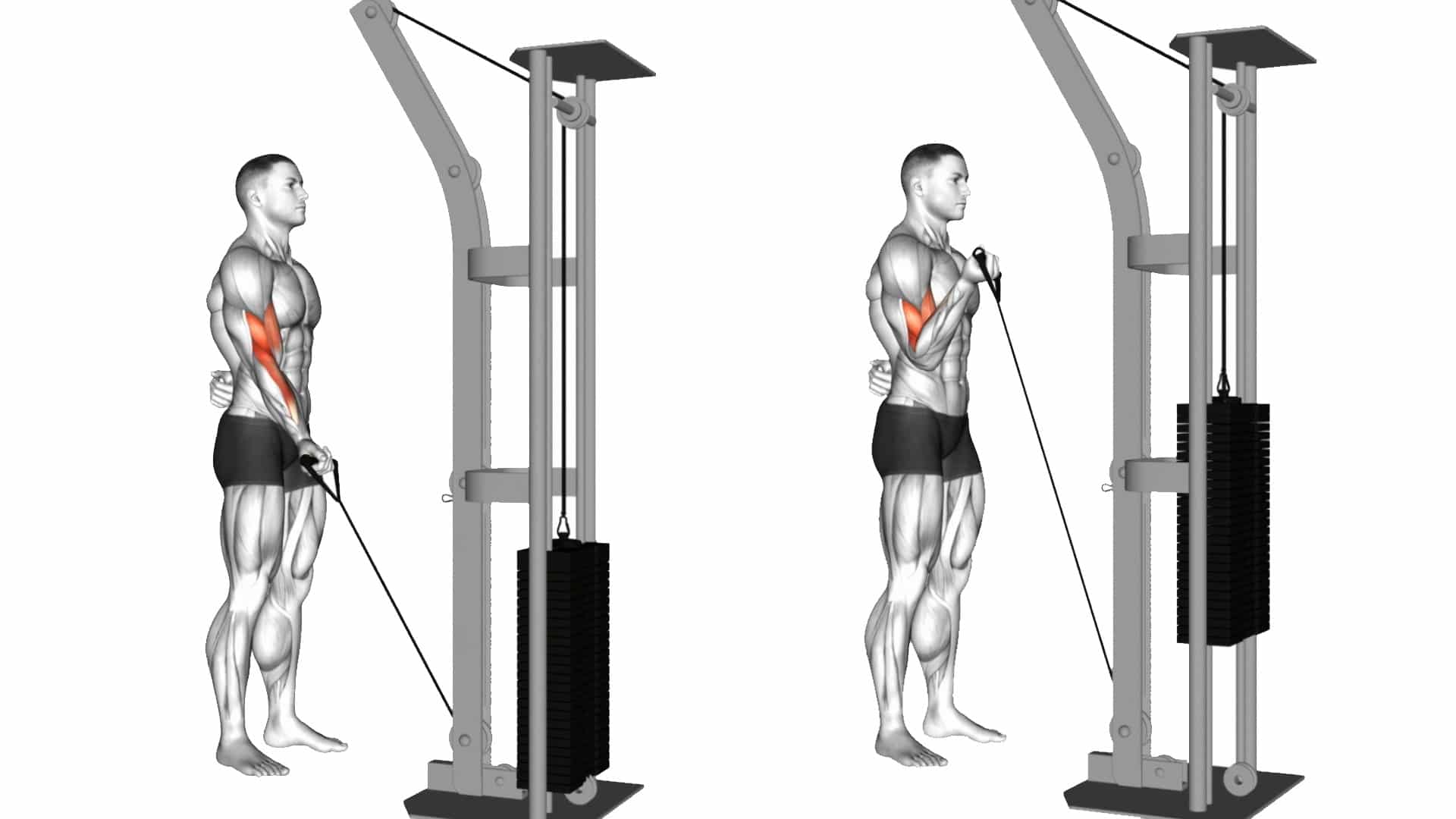 The squatting cable curl is a great exercise that allows you to isolate the biceps. Set up for the exercise by attaching a straight bar to the low pulley cable and selecting the weight you want to use on the stack. 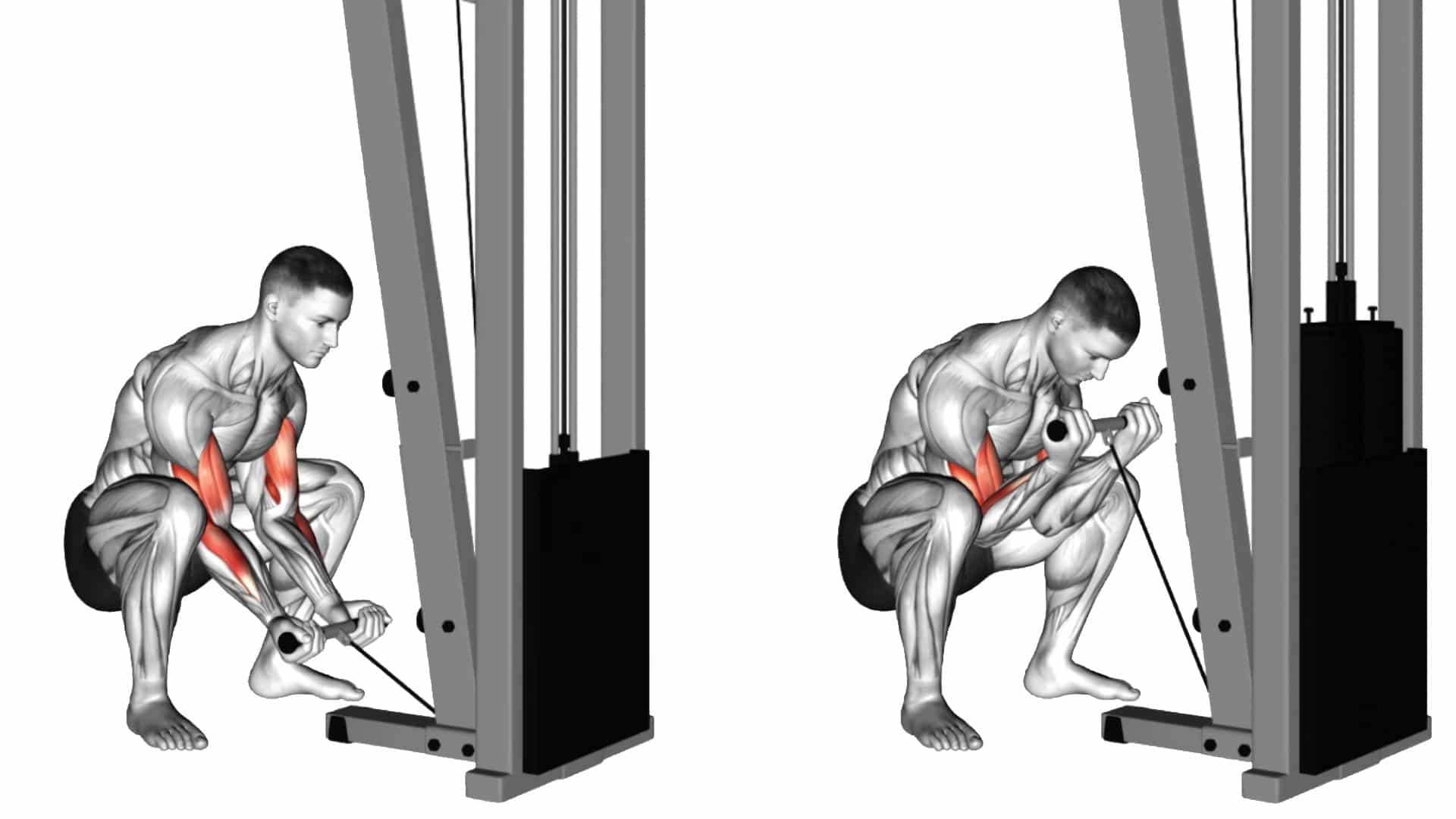 If you’re looking for a way to get more creative with your biceps curls, why not try lying (supine) cable curls?

The point of lying on your back for the lying cable curl is to eliminate all body momentum and therefore prevent cheating and better isolate your elbow flexors.

It is performed lying on the back, either on a bench or the ground, with the feet facing toward a cable stack. This movement is usually performed for moderate to high reps for a burn and pump as part of an arm-focused workout. 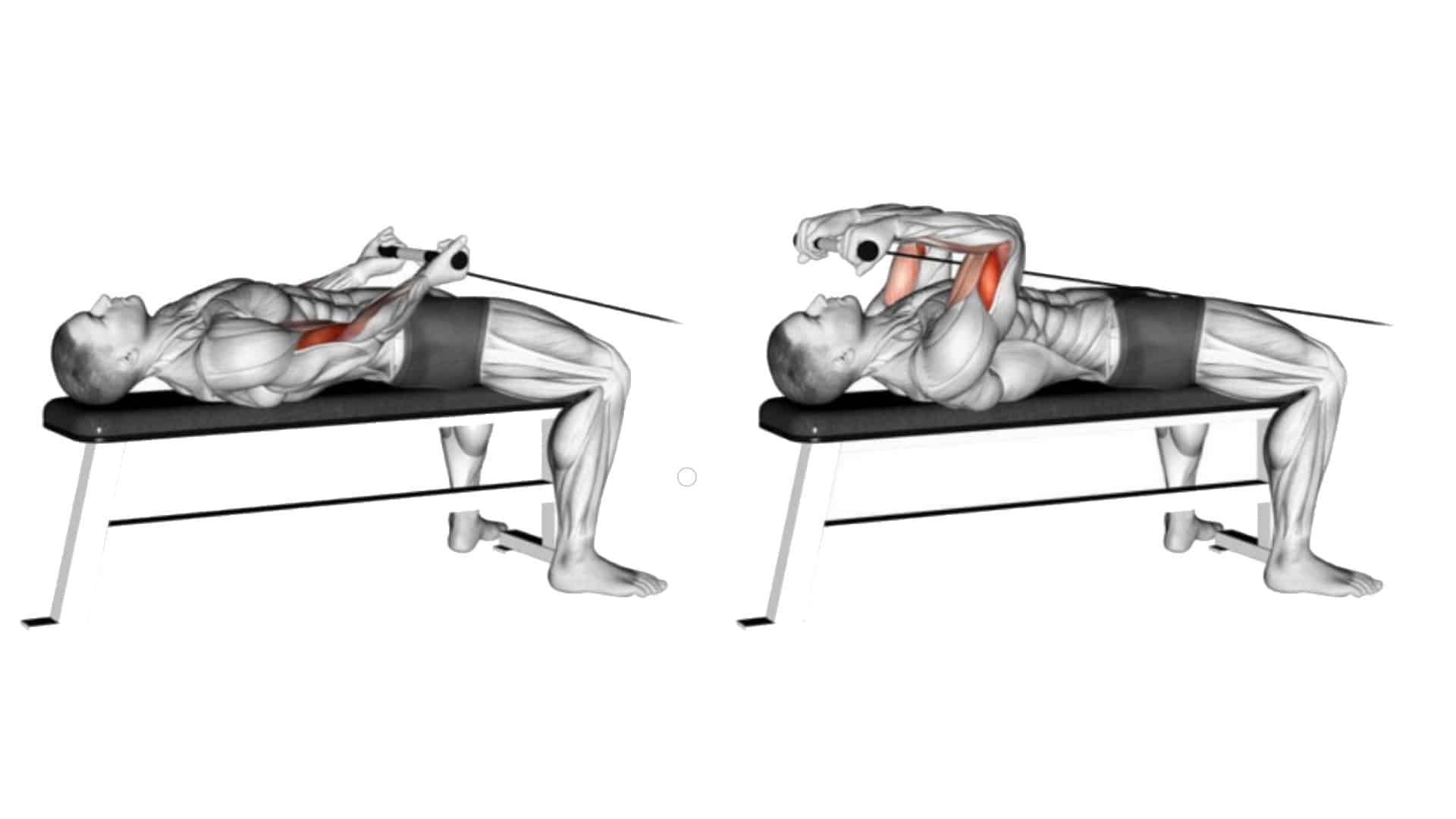 Are cables good for biceps?

Are cable curls better than dumbbell?

Are cable workouts better than dumbbell?

Cable exercises elicit a more powerful muscle pump than dumbbells because they provide your biceps with constant tension.

Including cable exercises in your bicep workout routine is an excellent way to add variety to your workout, while building strength and training your muscles from different angles.

Why are bicep cables Workouts better?

“Cables are a lot more fluid and smooth than free weights. “Using a series of pulleys means you’re less likely to get hurt as you don’t directly push or pull against the force of gravity”. This puts less stress on your joints for safer sets and reps.

Are cables better for hypertrophy?

Yes, anything from your body weight to dumbbells to cables will help you to build muscle. This means any media can yield fast results provided your muscles endure a high enough stimulus to promote hypertrophy.

Can you build biceps with cables?

Yes, it is possible to build biceps with cable exercises. Cable exercises such as cable curls and cable hammer curls can effectively target the biceps.

There are lots of cable bicep exercises that you can add in your bicep workout regime that help to build massive arm and strength.

Muscle and Strength: Cable Only Bicep and Tricep Workout 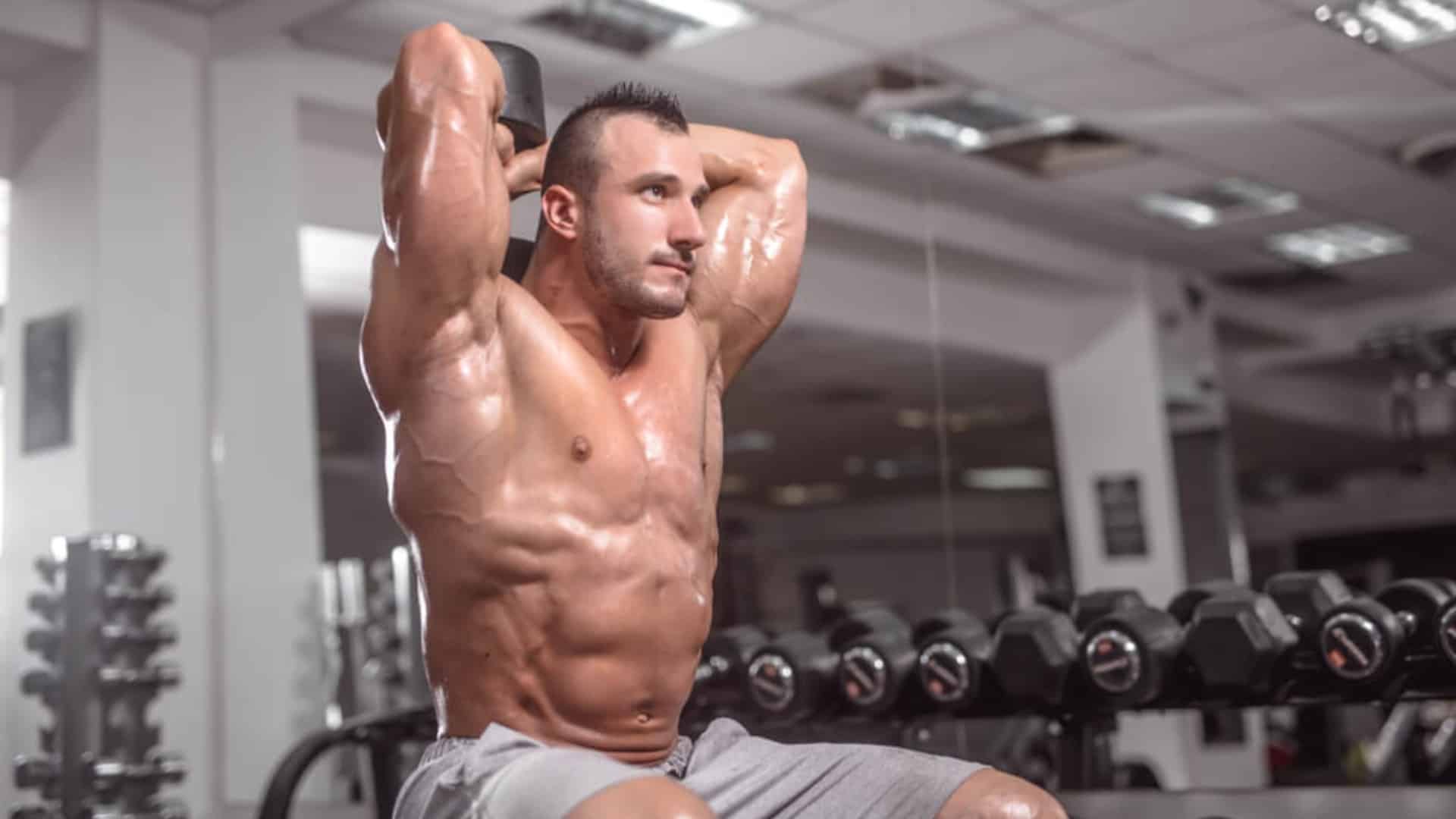 The tricep muscle is a crucial part of the upper arm and is often neglected in workout routines. …

The tricep rope extension is an effective triceps exercise. For this exercise, you’ll need a cable p…