If you want to build greater thickness and strength in your lower pecs, then you should add decline dumbbell bench press to your training regime. Having a well-developed lower chest contributes to the fullness of the upper body and has functional benefits.

The decline dumbbell bench press is also easy to learn and progressively overload, which is why it’s used to good effect in both novice and advanced training programs.

The chest muscle is commonly known as the pectoralis (pecs) muscle, which is divided into upper and lower sections. The lower region of the chest is the hardest area of the chest to build.

The pectoralis major has two functional subdivisions –the upper and lower regions.

What Is The Decline Dumbbell Press?

The decline dumbbell bench press aka dumbbell decline press is an upper body workout that engages the lower pec muscles, the triceps, and the anterior deltoid muscles of the shoulders. As the name suggests, you have to use a bench at a declined angle to perform the bench presses.

The angle of the adjustable bench in this variation puts more tension on your lower chest muscles than a flat bench press would.

The decline bench press is one of the best lower chest exercises, but there’s one major problem: the front deltoid likes to dominate the movement, which prevents us from getting the maximum benefit out of it.

When you do the decline DB bench press, it’s important to get the angle of the bench correct. What angles should I use during the decline dumbbell bench press to hit the lower chest the most?

Research indicates that the correct angle for the decline bench press should be 15–30 degrees declined from flat in order to target the lower chest. Even though 15-30 degrees may seem like a small angle, it is the proper decline for placing the strain on your lower pecs and minimizing the effect on the anterior deltoid muscles.

There are several reasons that motivate you to do decline dumbbell bench press, and I’ve mentioned some of them below. 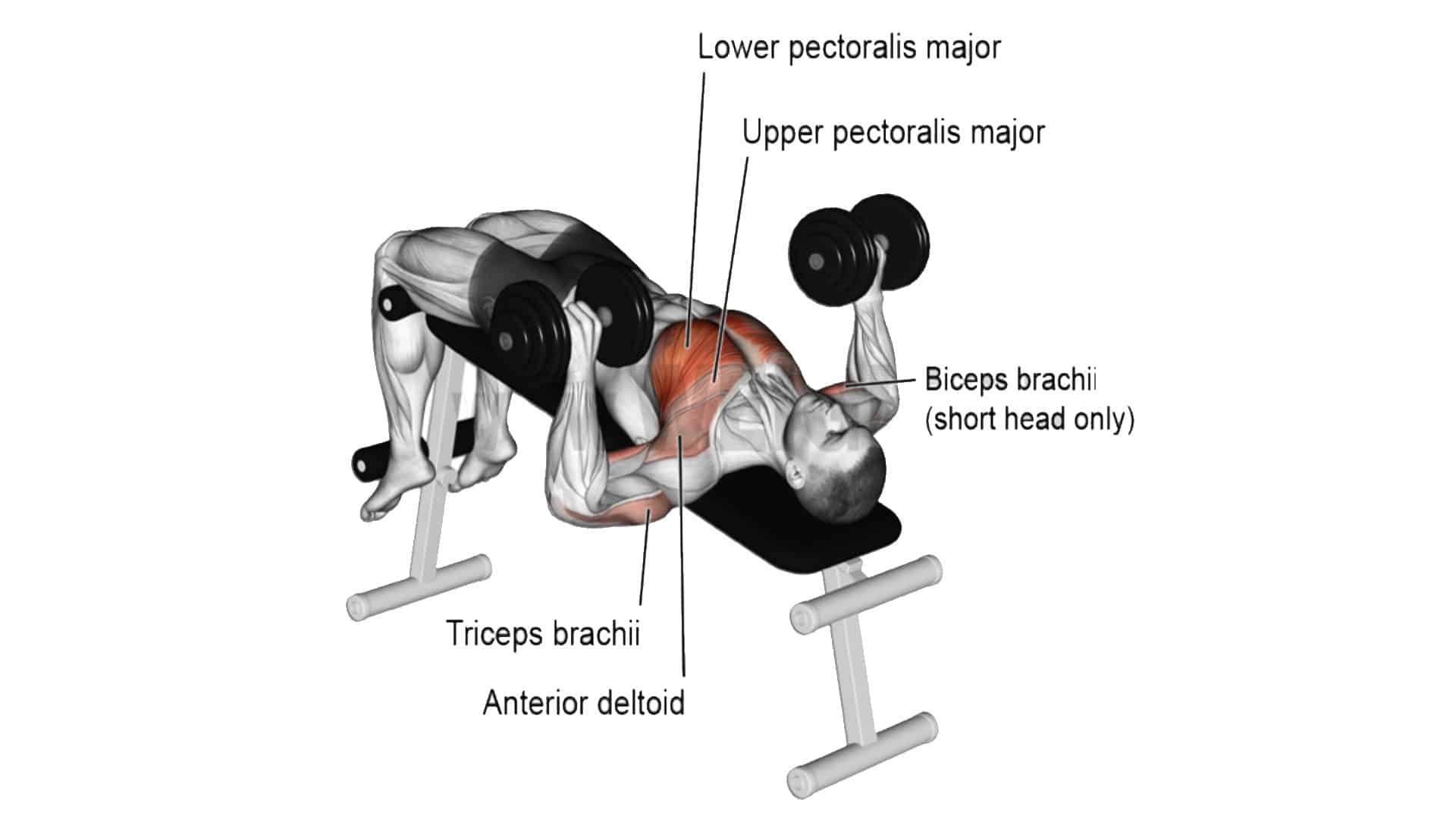 The decline DB press has the involvement of several synergist muscles, these muscles include,

A handful of other muscles worked or play the role of stabilizer muscles, include your

To train the lower chest (sternal head) requires you to change the angle of your press to emphasize the lower part of the chest. You do this by either performing exercises on a decline bench.

If you want to target your lower chest, using a dumbbell may be better than using a barbell because it allows for a greater range of motion.

Decline Dumbbell Press Exercise is an excellent exercise to build lower chest muscles. This dumbbell press is done on a decline bench with a pair of heavy dumbbells. 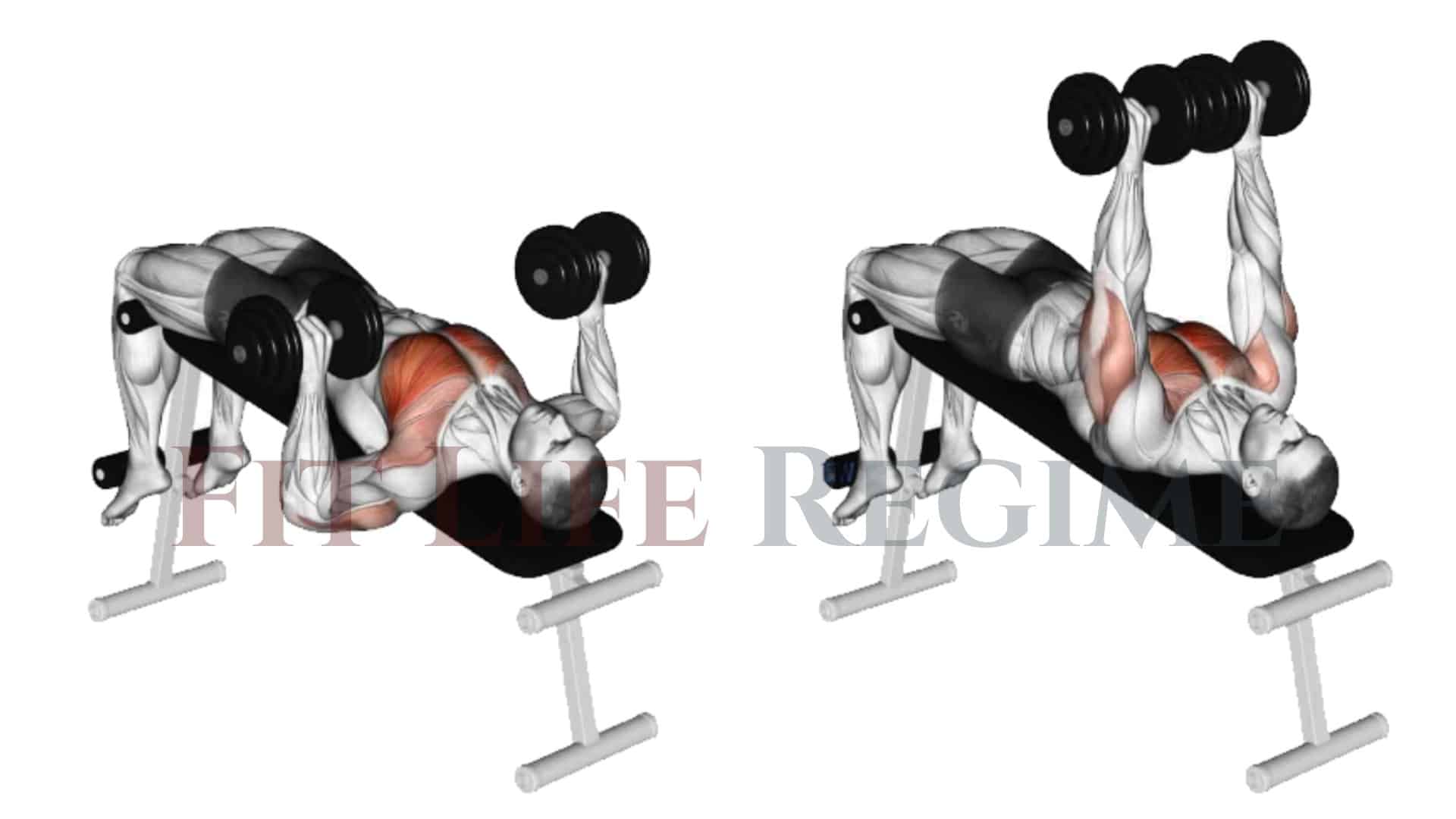 Choose a weight that allows you to execute the exercises with proper form throughout the entire set and repetition range. The load should bring you to or near failure within the given rep ranges to be effective.

Proper exercise technique is essential to ensure the safety and effectiveness of an exercise program.

The decline dumbbell bench press can be done in different ways to suit your fitness level.

If you are new to performing a decline dumbbell press, you may want to apply a few modifications to make the exercise easier. One way to counter this problem is to adjust the angle of the bench so that it is completely flat. Another is to use a lighter weight.

If you are looking for a more advanced variation to stimulate different muscle fibers in the chest, then try dumbbell decline hammer press. You can make it more difficult by using heavier weight. But focus on form while doing the same.

The decline hammer-grip dumbbell bench press is a compound exercise which primarily targets the lower Pectoralis Major (Chest). But the triceps and shoulders are secondary movers during the exercise, and they receive heavy stimulation as well.

Using a neutral grip is a safe alternative to the pronated grip decline dumbbell press as it protects the shoulder joints, and this is a great advantage. So, include the decline hammer-grip dumbbell bench press in your chest routine for great results. 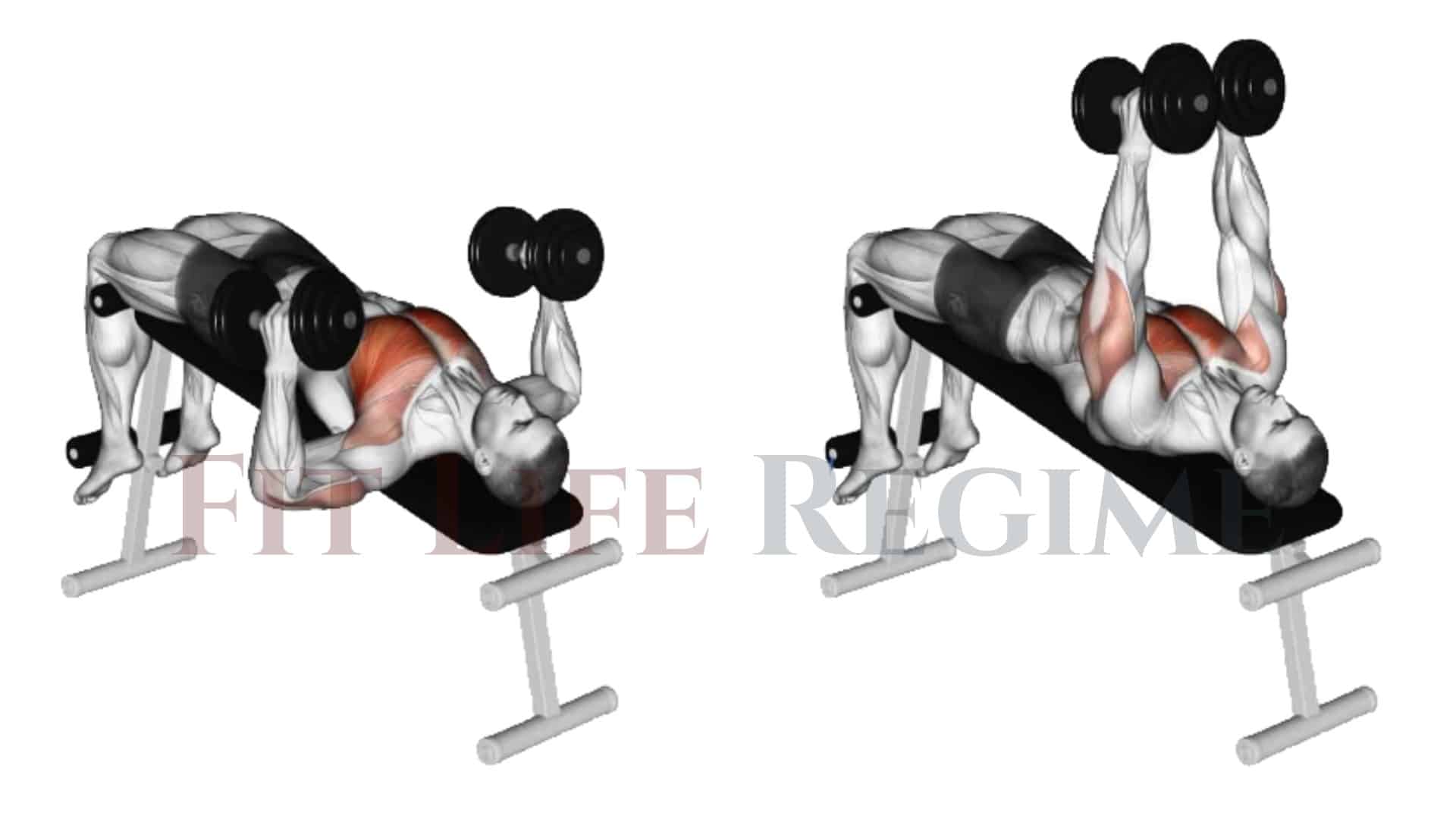 How To Do Decline Hammer-Grip Dumbbell Bench Press

The one-arm decline dumbbell bench press is an upper-body exercise that primarily targets the pectoral muscles, particularly the lower chest.

This press unilateral decline press variation is usually performed with lighter weight for moderate to high reps, such as 8-12 reps per set or more, since balance can be an issue.

How To Do Dumbbell One Arm Decline Chest Press

Before, we take a look at the best decline dumbbell chest press alternatives. We must keep in mind that a good alternative to the decline DB bench press will be able to satisfy the following criteria:

1. Activate the chest muscle groups, which are trained in the decline dumbbell press.

2. Isolate the muscle groups during execution.

3. Train the chest muscle through a longer range of motion

The decline press is a classic exercise and is the best alternate to the decline dumbbell bench press when focusing on the lower chest.

Although the flat version works the lower chest, the decline variation really focuses on the lower chest because the angle changes the pressing path.

If you’re looking for a bodyweight alternative to the decline dumbbell press exercise that helps you build lower pecs, then the chest dip is a great staple exercise to get you started.

Chest dip is one of the most effective compound movements for the upper body, especially pushing muscles in the lower chest and triceps.

If you have access to a cable setup, I recommend you try it as an alternative to decline dumbbell chest press. The standing low to high cable fly is a used to strengthen the pushing muscles of the body including the chest, biceps, and shoulders.

The High To Low Cable Fly is a variation of the chest fly is a great exercise to target the lower portion of your chest.

High to low cable fly is a machine exercise that primarily targets the lower chest and to a lesser degree also targets the shoulders and triceps.

It is easy to do and requires no more scientific details and fancy equipment. If you consistently do dumbbell decline chest press exercises with other variation of chest press, you will see results.

What is the best decline bench press angle?

There is no one definitive angle you should use. The recommended angle range for the decline bench press is 15-30 degrees. It would be advisable to speak with your gym instructor to find out which one would be the best for you.

The decline press with a pair of dumbbells is even more beneficial. You work through a slightly longer range of motion, which forces both sides of your body to work independently. The overload potential is impressive, and you are able to evenly emphasize both pectorals without the risk of developing side-to-side imbalances.

Is incline or decline better for chest?

For optimal chest development, all three varieties of the bench press should be used: flat, incline, and decline.