This rear shoulder exercise help you to hone in on the small muscles of the rear delt by using a full range of motion that will explore the growth of your shoulder muscles.

If you’re looking for a way to get more creative with your Rear delt cable workout, why not try High Cable Rear Delt Fly?

Your arms should move directly back (and downward slightly) almost parallel to the floor to target the posterior deltoid.

If the hands are raised through a higher arc to a point above shoulder level, the trapezius, and lateral deltoid make a bigger contribution to the movement.

The One Arm High Cable Rear Delt Fly is an exercise that builds muscle and strength in both the triceps and rear deltoids. Now, this is a very unconventional movement, but that doesn’t diminish its effectiveness. It’s kind of like two exercises in one which targets two different muscles. 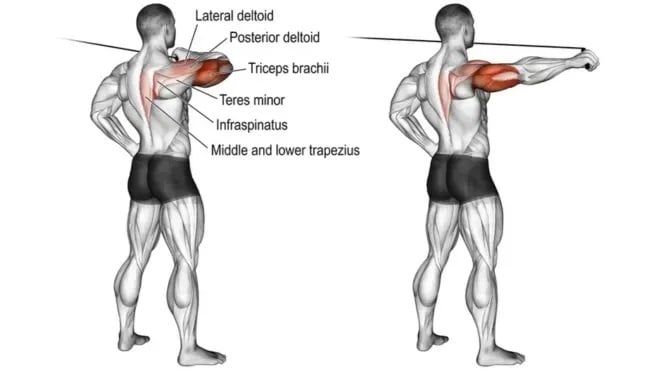 Working your delts can be done by a variety of exercises; we are going to mention a very popular alternative exercise – that you can do alongside, or instead of the regular high cable rear delt fly.

The bent-over dumbbell reverse fly, is the best alternative of high cable rear delt fly. It is a great exercise to assist you in building a rear delt and upper back.

Machine Rear Deltoid Fly is an excellent exercise for the rear deltoid. It provides a uniform resistance throughout the range of motion.

Face pull is a cable machine exercise that primarily targets the rear deltoid and to a lesser degree also targets the biceps, triceps, and traps.

This exercise prevents muscular imbalance and builds overall shoulder strength. Must try it as an alternate of high cable rear delt fly.

Now that you know a few variations for your High cable rear delts fly, hit the gym and try each one to get the full effect. Don’t limit yourself to variations on this exercise, also try some other alternate of this.

Seek new and interesting ways to perform all your staple movements so that you never get stuck waiting at the gym, never grow bored, and always keep growing.