History of Cannabis in India

Cannabis has a long history in India. Its oldest origin is not known in the world. What is certain is that around 3,000 BC, cannabis was consumed by people in some form. Cannabis in India has been known to be used at least as early as 2000 BCE.

In Indian society, it has been used for both medicinal and recreational purposes. Common terms for cannabis preparations include charas (resin), ganja (flower), and bhang (seeds and leaves). Indian drinks, such as bhang lassi and bhang thandai made from bhang being one of the most common legal uses.

In India, in the Hindu and Islamic traditions, as well as in numerous other minority religions, cannabis is bound to faith and mysticism.

Cannabis history in the medicine of India

Cannabis is produced from Cannabis sativa which seems to have diffused from a geographic point. According to classical plant explorers and more modern authorities, it is mostly found in Central Asia. Some felt its origin was in the Himalayan foothills, but offered little documentation.

Ayurveda, a sub-script of Atharvaveda, recognizes the cannabis plant as one of the five sacred plants. In the Vedas. We tell of the five kingdoms of herbs headed by Soma, may it, kusha grass, bhang (cannabis), barley, and the herb senna; release us from anxiety.

In the Sushruta Samhita, perhaps dating from the third to the eighth centuries BCE, cannabis was recommended for phlegm, catarrh, and diarrhea. As noted, an anti-phlegmatic would be interpreted in Ayurvedic medicine as possessing a wide variety of effects.

Cannabis also finds its mention in other historic scriptures like Dhanvantari Nighantu, Sarngandhara Samhita, and Kayyadeva Nighantu. It is also referred to in Ayurveda as an ingredient in various recipes of pain relievers and aphrodisiacs but in small quantities. It is noted that large quantities or long-time consumption can be addictive and that it is more dangerous than tobacco for the lungs and liver. Some also used the fumes of burning Indian Hemp (Cannabis Indica) as an anesthetic from ancient times. However, Ayurveda does not use cannabis for smoking recipes.

The Unani system of medicine practiced by Muslims in medieval India also used cannabis as a cure for diseases of the nervous system and as an antispasmodic and anticonvulsive. Sikh fighters often took bhang while in the battle to help them fight better and numb their sense of pain. A remnant of this tradition exists till this day with the Nihang, a Sikh order, who ritually consume this.

The Vedas call cannabis a source of happiness, joy-giver, liberator that was compassionately given to humans to help us attain delight and lose fear. It releases us from anxiety.

Ayurvedic scripts mention cannabis or marijuana as Vijaya, translated from Sanskrit. Cannabis. otherwise known as ganja. Lord Shiva, known as the lord of Vijaya and also well known for its connection with bhang. There is a Lord Shiva who wandered off into the fields after an angry discourse with his family. Drained from the family conflict and the hot sun, he fell asleep under a leafy plant. When he awoke, his curiosity led him to sample the leaves of the plant. Instantly rejuvenated, Shiva made the plant his favorite food and he became known as the Lord of Bhang.

Here’s an Indian painting of Shiva drinking bhang is believed to have been introduced to humankind by Lord Shiva. 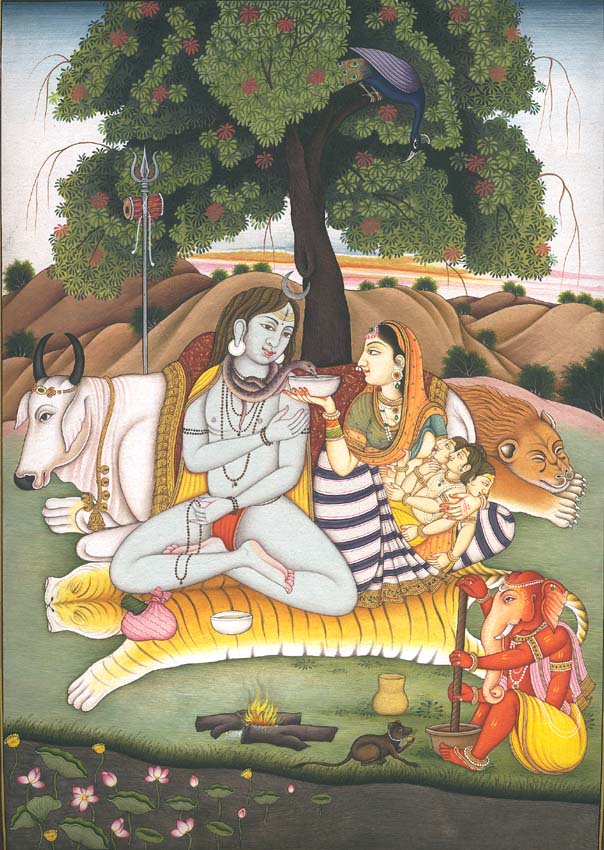 Another legend suggests that when the poison Halahala came out from the Samudra Manthan, Shiva drank it to protect everyone from it. Later, bhang was used to cool him down. Shiva Purana suggests offering bhang to Shiva during the summer months. But not all devotees offer bhang to Shiva.

Among the ascetics, the Naga babas and Aghoris, as they are known, use bhang very regularly, as they attempt to mimic the path to salvation by following in the footsteps of their chosen god Shiva. They even smear ash on their faces and retreat into remote caves in the Upper Himalayas for years at a time, meditating and only ever leaving their solitude to come down to the Mahakumbh Mela, an event that takes place once in 12 years.

The plant exhibiting properties of acting as a driver into the higher consciousness. Due to which it was also used by many great sages for their advancement in spirituality. Indian hemp, cannabis Sativa, is being cultivated since then, as a source of oil and medicine. Due to its non-psychoactive constituent, CBD exhibits properties of being highly nutritious and therapeutic. To this day, bhang also plays a significant role in Indian spirituality and culture.